A Short History of 105 The Strand

Our beautiful historic building at 105 The Strand has actually been around since 1900 when it was called The Commercial Hotel. Let us share the stories of our building with you here...

Prior to the construction of the first two-storied timber Commercial Hotel building, the site of 105 the strand was earlier occupied by a timber yard operated by Messers Lundon and Conway. Early 1900s, along the waterfront of Tauranga, land was reclaimed for construction of the railway which ran alongside Tauranga’s Coastline. This railway used to be for commercial use, however this changed and is no longer in use for the public.

The very first proprietor of the Commercial Hotel on 105 the Strand was Mr. Joseph Ellis. On July 24th 1900 the hotel was lit up in the front with hydron carbon gas. It’s reported as the first installation of gas in Tauranga. Back in the days it was fashionable for policemen to resign from the force and take over as licensees of hotels. In 1911 constable Quirk resigned to take over the Commercial Hotel. Unfortunately for him this only lasted for about 5 years as the building was destroyed in 1916 by a fire that took down a whole block of buildings along the Strand.

A new hotel was built on the site and opened on September 2nd 1918. This is the construction as we know it today. In the newspapers it was promoted as the most fire proof building in Tauranga being build from concrete foundation and walls. It used to have a gentlemen’s bar downstairs, strictly only accessible for men.

The 1950’s
Over the years, many changes were made to the layout of the building. In 1954 alterations and additions for New Zealand Breweries Ltd were designed by Lewis Walker and Hillary Architects. These included alterations to ground floor layout, installation of the lift, alterations to the stair lobby, the addition of a two-storey wing to the rear of the hotel incorporating staff quarters and laundry and the addition of the top storey over the former flat roof to provide more hotel rooms and bathrooms. Fire escape balconies and stairs were added as part of these alterations. First floor bathrooms were refitted for New Zealand Breweries in 1965. The interior linings, doors and trim, and floor coverings all appear to be part of later alterations.

The Strand in the 2000s
In 2003 the building had some internal and exterior alterations done including remodelling and upgrading the façade. This was done just before the hotel changed into a backpackers.

Sarah Meadows, originally from Hawkes Bay has travelled the world far and wide. After exploring all the very far corners of the world, she decided to make a change in her life and starting her own business, setting up a backpackers in Tauranga. With the help of her father, she found the perfect building and location on 105 the Strand, the former St. Armand hotel building. At this point, the hotel was not in a very good state so Sarah made some changes and turned it into the backpackers hot spot of Tauranga. The place to be.

In 2019, Sarah Meadows and her husband Matt Young took the opportunity to purchase the entire building of former owner. This included the restaurant on ground level below the backpackers.

Major construction had to be done to make the building earthquake proof according to current standards and also the interior had some remodelling and refurbishing done. A new look, a new name and a new lick of paint changed the look but not the soul of the building.

Wanderlust NZ was born on 105 The Strand, and in October 2020 it opened up its doors to the public, about 100 years after the very first structure was built on the site.

Ours is the oldest remaining hotel in Tauranga. 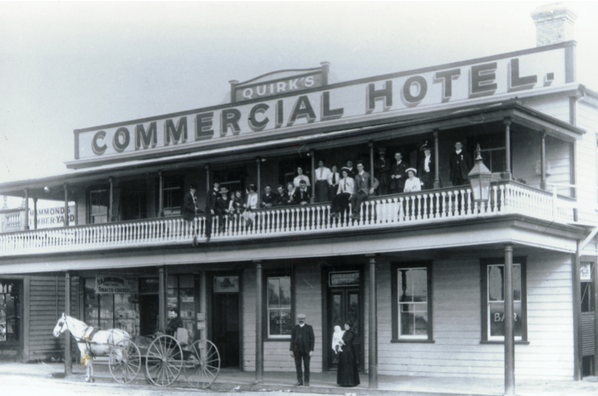